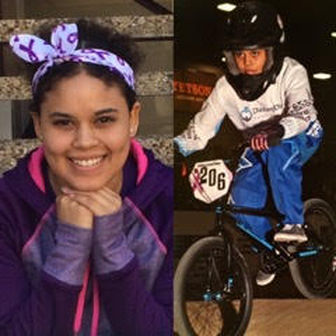 Hi my name is Sasha Pina. I am 21 years old and was diagnosed with epilepsy at the age of 16 a year after a traumatic brain injury.

Things got better and the longest I have been seizure free was 11 months, then I had a breakthrough seizure. I was having a lot of auras, about three times a week I was having them. I was having seizures about 2 or 3 times a month. We knew at this point the medication wasn’t working anymore and we wanted to look into surgery. I was just recently diagnosed with Refractory Epilepsy. On February 18, 2016 I had VNS surgery to try and reduce the amount of seizures and auras. So far no seizures but I have had a few auras, but the VNS has stopped it before it got any stronger. I still take my 3 medications twice a day.

I am an ambassador with the Danny Did Foundation and work closely with the Epilepsy Foundation of Nevada. I race BMX bikes with the Athletes vs Epilepsy program through the Epilepsy Foundation of America. It has been my mission to spread and raise awareness. I love doing it and it brings such joy to my heart know that I am helping and educating people. I work at a Christian private school in elementary and about to go to school in the nursing program. Thank you for reading my story.